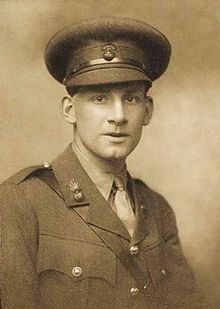 I’m still thinking about the poets of WWI this week so this is one of Siegfried Sassoon’s most famous poems, Counter-Attack.

We’d gained our first objective hours before
While dawn broke like a face with blinking eyes,
Pallid, unshaven and thirsty, blind with smoke.
Things seemed all right at first. We held their line,
With bombers posted, Lewis guns well placed,
And clink of shovels deepening the shallow trench.
The place was rotten with dead; green clumsy legs
High-booted, sprawled and grovelled along the saps
And trunks, face downward, in the sucking mud,
Wallowed like trodden sand-bags loosely filled;
And naked sodden buttocks, mats of hair,
Bulged, clotted heads slept in the plastering slime.
And then the rain began,—the jolly old rain!

A yawning soldier knelt against the bank,
Staring across the morning blear with fog;
He wondered when the Allemands would get busy;
And then, of course, they started with five-nines
Traversing, sure as fate, and never a dud.
Mute in the clamour of shells he watched them burst
Spouting dark earth and wire with gusts from hell,
While posturing giants dissolved in drifts of smoke.
He crouched and flinched, dizzy with galloping fear,
Sick for escape,—loathing the strangled horror
And butchered, frantic gestures of the dead.

An officer came blundering down the trench:
“Stand-to and man the fire step!” On he went …
Gasping and bawling, “Fire-step … counter-attack!”
Then the haze lifted. Bombing on the right
Down the old sap: machine-guns on the left;
And stumbling figures looming out in front.
“O Christ, they’re coming at us!” Bullets spat,
And he remembered his rifle … rapid fire …
And started blazing wildly … then a bang
Crumpled and spun him sideways, knocked him out
To grunt and wriggle: none heeded him; he choked
And fought the flapping veils of smothering gloom,
Lost in a blurred confusion of yells and groans …
Down, and down, and down, he sank and drowned,
Bleeding to death. The counter-attack had failed.