I’ve been hearing Daphne Du Maurier’s name everywhere lately. The new movie based on My Cousin Rachel will be out soon & nearly every BookTuber I follow seems to be reading Du Maurier or coveting the lovely new Virago Modern Classics editions. Lauren from Lauren and the Books is a particular fan. She’s recently read the short story collection The Birds and other stories & filmed a review of it. She also mentioned Rebecca (both book & film) several times in the latest Books and Blankets podcast with Mercedes from Mercy’s Bookish Musings. Simon from Savidge Reads never lets an opportunity go by to mention Rebecca which is his favourite book.

Apart from all the Du Mauriers from my shelves that you can see above, I also have an omnibus on my eReader that includes one of the short story collections, The Breaking Point. I’ve been dipping into short stories lately so thought I’d read one of Daphne’s. I chose the first story in the collection, The Alibi, the story of a man who is bored with his life &, on an impulse, decides to murder someone. He chooses a random house in a random street, knocks on the door & ends up renting a room from the lonely woman who lives there with her young son. He tells the woman that he’s an artist & becomes so obsessed by the story he’s told that he puts it into practice. His fantasy gradually takes over his life & comes to a shocking conclusion.

I read another story today (Ganymede – a classics scholar goes to Venice instead of Devon for his holiday & becomes entangled in the life of a beautiful young man) Both stories have such a sense of foreboding or maybe I just expect that from a Du Maurier story. Her short stories are often more macabre than her novels. Just think of The Birds, The Blue Lenses or Don’t Look Now. The descriptions of Venice in Ganymede are so seductive yet with a hint of menace as well. Du Maurier was certainly a writer with an incredible range & I’m looking forward to finishing this collection of stories. 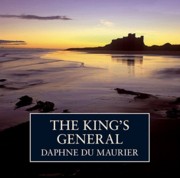 Only after reading Ganymede did I realise (while looking DDM up on Fantastic Fiction), that today, May 13th, is the 110th anniversary of her birth. Happy Birthday Daphne! My browsing led me to the Introduction by Justine Picardie to the Virago edition of The King’s General, one of my favourite Du Maurier novels. Picardie’s experience, reading the novel for the first time as a teenager, was so close to my own that I was transported back over 30 years to my local library which had a shelf full of the old yellow Gollancz hardbacks of Du Maurier’s novels. A while ago, I added the audio book of The King’s General to my Audible library. It’s read by Juliet Stevenson, one of my favourite narrators & I’ve downloaded it, all ready to go. This is one of Du Maurier’s historical novels, set in the 16th century during the Civil War at Menabilly, the Cornish house she loved so much. It’s the story of Honor Harris & her love for Sir Richard Grenvile.

I still have several unread Du Mauriers on the tbr shelves & I’m tempted to complete my collection with some of the new VMCs. I may not be able to resist.