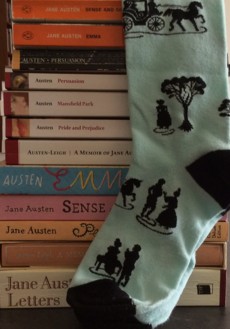 Autumn is finally here. The clocks went back last night, the mornings have been crisp & today I’m wearing my beautiful mint-green Jane Austen socks. I’ve already posted some of my favourite autumnal poems & quotes trying to summon up the season so today, in honour of my socks, here’s a poem by the divine Miss Austen. This was written to her brother, Frank, on the birth of his son & contains the lovely lines about making a home. Jane, her mother & sister, Cassandra, were finally settled at Chawton & were enjoying the process of making a home.

I’ve also been thinking about Austen because I’ve been listening to a new (to me) podcast, Tea and Tattle. Miranda & Sophie talk about books, lifestyle & culture. I’ve listened to several episodes so far, on their favourite Jane Austen heroines & the trend for books about decluttering. The next episode of the podcast (due this coming week) will feature renowned Austen scholar Janet Todd & author Diana Birchall who blogs at Light, Bright, and Sparkling. Diana & I are in the same online reading group & it will be a thrill to hear her voice as she & Janet chat with Miranda & Sophie about their love of Austen.

My dearest Frank, I wish you joy
Of Mary’s safety with a Boy,
Whose birth has given little pain
Compared with that of Mary Jane.–
May he a growing Blessing prove,
And well deserve his Parents’ Love!–
Endow’d with Art’s and Nature’s Good,
Thy Name possessing with thy Blood,
In him, in all his ways, may we
Another Francis WIlliam see!–
Thy infant days may he inherit,
THey warmth, nay insolence of spirit;–
We would not with one foult dispense
To weaken the resemblance.
May he revive thy Nursery sin,
Peeping as daringly within,
His curley Locks but just descried,
With ‘Bet, my be not come to bide.’–
Fearless of danger, braving pain,
And threaten’d very oft in vain,
Still may one Terror daunt his Soul,
One needful engine of Controul
Be found in this sublime array,
A neigbouring Donkey’s aweful Bray.
So may his equal faults as Child,
Produce Maturity as mild!
His saucy words and fiery ways
In early Childhood’s pettish days,
In Manhood, shew his Father’s mind
Like him, considerate and Kind;
All Gentleness to those around,
And anger only not to wound.
Then like his Father too, he must,
To his own former struggles just,
Feel his Deserts with honest Glow,
And all his self-improvement know.
A native fault may thus give birth
To the best blessing, conscious Worth.
As for ourselves we’re very well;
As unaffected prose will tell.–
Cassandra’s pen will paint our state,
The many comforts that await
Our Chawton home, how much we find
Already in it, to our mind;
And how convinced, that when complete
It will all other Houses beat
The ever have been made or mended,
With rooms concise, or rooms distended.
You’ll find us very snug next year,
Perhaps with Charles and Fanny near,
For now it often does delight us
To fancy them just over-right us. 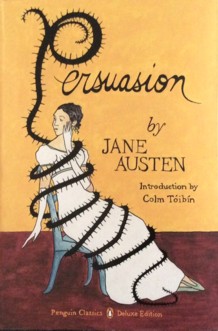 I’m not sure that posting poems about autumn is having any effect on the weather (actually I am sure – it’s having no effect whatever) as it’s still hot, humid & rainless in Melbourne. At least it gives me the chance to reread Anne Elliot’s musings,

… repeating to herself some few of the thousand poetical descriptions extant of autumn, that season of peculiar and inexhaustible influence on the mind of taste and tenderness, that season which has drawn from every poet, worthy of being read, some attempt at description, or some lines of feeling.

However, reading autumn poetry like this suitably romantic poem, An Autumn Evening, by Lucy Maud Montgomery, makes me feel cooler. Can’t you imagine Anne Shirley walking through the woods rhapsodising over the falling leaves while declaiming this? Almost as dramatic as The Lady of Shalott.

Dark hills against a hollow crocus sky
Scarfed with its crimson pennons, and below
The dome of sunset long, hushed valleys lie
Cradling the twilight, where the lone winds blow
And wake among the harps of leafless trees
Fantastic runes and mournful melodies.

The chilly purple air is threaded through
With silver from the rising moon afar,
And from a gulf of clear, unfathomed blue
In the southwest glimmers a great gold star
Above the darkening druid glens of fir
Where beckoning boughs and elfin voices stir.

And so I wander through the shadows still,
And look and listen with a rapt delight,
Pausing again and yet again at will
To drink the elusive beauty of the night,
Until my soul is filled, as some deep cup,
That with divine enchantment is brimmed up.

William Cowper lived in Norfolk for the last years of his life & was buried in St Nicholas Church in East Dereham. This beautiful stained glass window (photo by John Salmon from Wikimedia Commons) above his tomb depicts Cowper reading to his pet hares, Bess, Tiney & Puss. This poem, Epitaph on a Hare, was written when Tiney died.

Cowper suffered from depression throughout his life & lived a retired life. His poetry is often about the delights of the countryside which is probably why it appealed to Jane Austen who gives Marianne Dashwood & Fanny Price his lines to quote. I like the mock-serious attitude of this epitaph about a beloved pet whose habits Cowper had obviously observed closely, even down to his favourite foods.

Old Tiney, surliest of his kind,
Who, nursed with tender care,
And to domesticate bounds confined,
Was still a wild jack-hare.

Though duly from my hand he took
His pittance every night,
He did it with a jealous look,
And, when he could, would bite.

His diet was of wheaten bread,
And milk, and oats, and straw,
Thistles, or lettuces instead,
With sand to scour his maw.

On twigs of hawthorn he regaled,
On pippins’ russet peel;
And, when his juicy salads failed,
Sliced carrot pleased him well.

A Turkey carpet was his lawn,
Whereon he loved to bound,
To skip and gambol like a fawn,
And swing his rump around.

His frisking was at evening hours,
For then he lost his fear;
But most before approaching showers,
Or when a storm drew near.

Eight years and five round-rolling moons
He thus saw steal away,
Dozing out all his idle noons,
And every night at play.

I kept him for his humor’s sake,
For he would oft beguile
My heart of thoughts that made it ache,
And force me to a smile.

But now, beneath this walnut-shade
He finds his long, last home,
And waits in snug concealment laid,
Till gentler Puss shall come.

He, still more agèd, feels the shocks
From which no care can save,
And, partner once of Tiney’s box,
Must soon partake his grave.