I thought about calling this post The Search for Mindfulness but realised it would be false advertising. I read an article about mindfulness in the Age at the weekend & realised I have a long way to go, especially when it comes to concentrating on one thing at a time! These are the books currently sitting on the table next to my reading chair. From the top – A Writing Life : Helen Garner and her work by Bernadette Brennan (I especially want to read the chapters on Garner’s non-fiction writing. I know there are holds on this at work so I have to read it soon); Desperate Remedies by Thomas Hardy (beautiful Folio Society edition with lovely woodcut illustrations. I’m trying to come up with a novel that I can lead discussion on for my 19th century bookgroup. The group has been going for over 10 years so we’ve read all the usual suspects. I thought Sybil might be the one, but no. This is Hardy’s first published novel & apparently has elements of the sensation novel in the plot so I hope I’m enthusiastic about it); Come In Spinner by Dymphna Cusack & Florence James. I considered this for the 1951 Club but didn’t read it. Then, I read a great review on a blog I’ve just discovered – Words and Leaves – & I’ve already made a start. It’s ANZAC Day today & the novel is set in a posh Sydney hotel during WWII so it’s appropriate reading. Words and Leaves has also pointed me in the direction of a great local tea company, McIver’s. I love tea & have already bought two varieties to try, Miner’s & Tramtracker. The Miner’s tea is already a firm favourite, I will be buying more. I realise I shouldn’t have explored the website further but I do covet the Dancing Wombat mug…

The House of the Dead by Daniel Beer is a study of Siberian exile under the Tsarist regime. I’ve been fascinated by the Decembrist rebels ever since I first read Mara Kay’s novel The Youngest Lady-in-Waiting when I was a teenager. This is a fascinating look at Siberia, the system of exile, the punishments & the way that the exiles & prisoners influenced radical thought in 19th century Russia; Clarissa, you already know about; Venetia by Georgette Heyer is there because I want to read it before listening to this podcast; The Necklace and other stories by Guy de Maupassant is a new translation by Sandra Smith & I was tempted by the gorgeous cover. I’ve read two of the stories so far, which is a start…

Then, if that wasn’t enough, on the other side of the table are these journals & magazines that I was going to read the minute they entered the house (please don’t look at the publication dates on some of the spines & I haven’t taken a photo of the coffee table where the rest of the magazines are lurking). That’s not Pride and Prejudice on the top, that’s my Kindle cover. I’m reading Clarissa on the Kindle when the book is too heavy. Of course, the only magazine I want to read right now is the latest edition of History Today on my iPad (I’m not telling you how many unread magazines are on the iPad) with articles on the Oracle at Delphi & Ethelred the Unready.

I probably shouldn’t be thinking about pre-ordering books but here are two which I just have to mention. I may have ordered them already but I couldn’t possibly comment. In 2009, Susan Hill wrote Howards End is on the Landing, a book about a year spent reading the books already in her house. Even though I obviously didn’t take any lessons from it, I’m very pleased that Jacob’s Room has Too Many Books will be published in October. From what I can gather, JRHTMB will be a kind of companion volume to HEIOTL, a meditation on books & life.

Martin Edwards, crime writer, critic, anthologist & consultant to the wonderful British Library Crime Classics series, has announced his next book, The Story of Classic Crime in 100 Books, published in August. There are also another half-dozen new titles in the series due out by the end of the year including Continental Crimes, an anthology of mystery stories set in Europe & farther afield, Foreign Bodies (great title!), an anthology of translated crime stories & another Christmas mystery, Portrait of a Murderer by Anne Meredith. 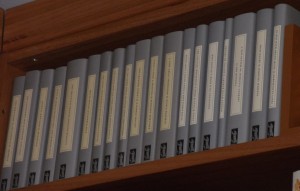 The new Persephone books for the (UK) Spring have just been published. Effi Briest by Theodor Fontane & Earth and High Heaven by Gwethalyn Graham. I’m looking forward to reading both of them & also to the new Biannually which will hopefully arrive within the next week or so & be read immediately.

Finally, I may have mentioned the word tsundoku before. It’s a Japanese word that describes someone who collects books without reading them (me, in other words, & probably quite a few of you reading this post). Anne Boyd Rioux mentioned the word on Facebook the other day & it reminded me of my friend Erika who writes a blog called Tsundoku Reader. I love Erika’s blog for many reasons, not least because most of the books she so enticingly reviews are in Japanese & not available in English translation. I have enough temptations as it is & no time to learn Japanese. Reading Erika’s reviews gives me such a flavour of Japanese life & the photos she uses to illustrate the blog are lovely. This post about comfort reads is typical. I would love to read Satoshi Yagisawa’s  novels about Morisaki Books. After reading The Tale of Genji last year, I plan to read more about Japan. Maybe when I’ve polished off everything on my reading table. 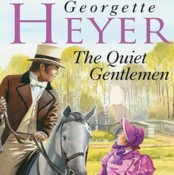 Gervase Frant, sixth Earl of St Erth, returns to Stanyon, his family home in Lincolnshire, a year after the death of his father & after several years as a soldier on the Continent. The unregarded son of his father’s first, unhappy, marriage, his return is disconcerting for his stepmother, the Dowager Countess, & especially for her son, Martin. Martin has been the spoiled darling of both his parents, treated almost as the heir, & the reappearance of his half-brother is a source of jealousy. The estate has been stewarded by a cousin, Theo Frant, a steady hand who has kept in touch with Gervase. Miss Drusilla Morville, the daughter of a local gentry family, is visiting Stanyon as the guest of the Dowager while her parents are on their travels.

Gervase’s quiet good manners soon recommend him to the Dowager & the rest of the household. All except Martin, whose resentment is plain. When Gervase rescues the beautiful young heiress, Marianne Bolderwood, after she is thrown from her horse, Martin’s jealousy is aroused. Marianne’s easy, flirtatious manners have led Martin to believe that she returns his love although she is too innocent to realise it. When Gervase’s friend Lord Ulverston arrives, the attraction between him & Marianne is obvious to everyone but Martin. He tries to force his attentions on Marianne at a ball at Stanyon by proposing to her & then tries to force Ulverston to fight a duel.

More seriously, Gervase is the victim of several “accidents” which could be something more sinister. Martin forgets to warn his brother of a rickety bridge & a rope pulled deliberately across the road trips his horse. When Gervase is shot while out driving, & Martin disappears, everything seems to be pointing in the direction of a jealous young man with murderous intent. But is this really the answer? Gervase is determined to avoid scandal but can he believe that Martin was not involved?

I love Georgette Heyer. Of course, there’s also romance as well as intrigue in this sparkling story. Drusilla Morville is a quiet, elegant young woman from an intellectual family who has an easy, companionable friendship with the whole family. She’s on the spot when Gervase is thrown from his horse & takes on the burden of nursing him after he’s shot. Her impeccable manners & competence impress Gervase but Drusilla will not allow herself to think of anything but friendship with a rich nobleman, her parents’ landlord to boot, who will surely marry an heiress. Gervase’s initial impression of Drusilla on his first evening at home,

” And who, pray, is that little squab of a female? Was she invited for my entertainment?Don’t tell me she is an heiress! I could not – no, I really could not be expected to pay my addresses to anyone with so little countenance or conversation!”

‘Drusilla! No, no, nothing of that sort!” smiled Theo. “I fancy my aunt thinks she would make a very suitable wife for me!”

soon changes as they become acquainted & he realises that she has plenty of humour & conversation as well as quiet good sense. She even discusses Mary Wollstonecraft’s life & work with Gervase quite matter of factly which I loved. Drusilla is one of Heyer’s older heroines & much more interesting to me than flighty Marianne Bolderwood with her beauty & her train of suitors. I also adored the Dowager Countess with her Lady Catherine-like pronouncements & her complete self-absorption. The mystery of the attacks on Gervase is absorbing, I loved the descriptions of the estate, the house & the countryside & altogether, this is now one of my favourite Heyer novels. My enjoyment was enhanced by listening to the audio book read by Cornelius Garrett, one of my favourite narrators. I like to listen to an audio book for 15 mins or so before I go to sleep but some nights I was desperately trying to stay awake for just a few minutes more to find out what would happen. I’ve listened to several Heyers on audio & enjoyed them all. I still have Frederica, read by Clifford Norgate in my Audible library but the next one I want to read is Venetia as I want to listen to the Backlisted podcast which you can listen to here or wherever you get your podcasts.

It was a real treat to read The Quiet Gentleman for the 1951 Club. Thanks Simon & Karen for the opportunity to read a book that had been in the tbl (to be listened) list for too long.