Simon at Stuck in a Book & Karen at Kaggsy’s Bookish Ramblings are hosting the 1951 Club next month, April 10th-16th to be precise. I love this idea, it’s practically the only challenge I ever take part in. Mostly because they choose such interesting years but also because I invariably have several books on the tbr shelves to choose from so I’m participating in a challenge & reducing the tbr at the same time. 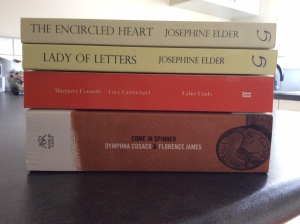 There are links on both blogs to lists of titles published in 1951 & all the information you need to join in. I’ve pulled these books from the shelves – two Greyladies titles by Josephine Elder, The Encircled Heart and Lady of Letters, Lucy Carmichael by Margaret Kennedy & Come In Spinner by Dymphna Cusack and Florence James.

However, just as I had virtuously planned to read one of these books that I already own, I read this post by Moira at Clothes in Books. Once you are thinking about 1951, books seem to pop up everywhere that were published in that year. I do like Michael Gilbert’s books & this one, about a murder trial with links to the French Resistance during WWII, sounds terrific. So, I bought the eBook.

I also plan to listen to The Quiet Gentleman by Georgette Heyer, read by Cornelius Garrett.

Looking at the lists on Goodreads, I’ve also discovered that I’ve read a lot of books published in 1951 so I’ll be posting links to my reviews of those titles in 1951 Club week as well. It’s going to be wonderful, I can’t wait!