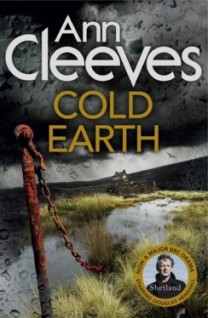 During Magnus Tait’s funeral a landslide sweeps down the hill &, along with headstones & grave markers, destroys a nearby croft. Inspector Jimmy Perez is attending the funeral & decides to take a look at the seemingly abandoned croft. He’s surprised to find a woman’s body among the debris & even more surprised to discover that the forensic evidence points to murder rather than accidental death. The croft, Tain, had belonged to Minnie Laurenson &, after her death, her American niece had inherited the property. Apart from the occasional holiday let, the croft was empty & the identity of the woman proves hard to track down. The only clue is a letter addressed to Alis & a belt that may be the murder weapon. Local landowners Jane & Kevin Hay were Minnie’s closest neighbours but polytunnels & trees obscure their view. Perez calls in Chief Inspector Willow Reeves from Inverness to lead the investigation & the team’s first priority is to discover the identity of the victim.

Jimmy & Willow have worked together before & their friendship is tinged with a tentative attraction that both of them recognise but are unwilling to explore. Jimmy is still grieving for his fiancée, Fran, & he’s caring for Fran’s daughter, Cassie. He returned to Shetland some years before & knows the benefits & disadvantages of a tight-knit community when it comes to a murder investigation. The first clues to the victim’s identity point to a happy, attractive woman buying champagne for a special Valentine’s Day dinner but then another witness, Simon Agnew, comes forward & describes a visit from the same woman to his counselling drop-in service where she had been distraught & despairing. When the team discovers that the woman was using a false identity & that she had ties to Shetland going back some years, they need to find out who could have stayed in contact with her & what brought her back to the island. A second murder close to the scene of the first complicates the investigation & leads to suspicion & mistrust as the victim’s private life is exposed.

The Shetland series is one of my favourites (links to my previous reviews are here). Originally a quartet of novels – Raven Black, White Nights, Red Bones, Blue Lightning – but the success of the quartet led to more Shetland novels – Dead Water, Thin Air & now Cold Earth. The Shetland setting is one of the strengths of the books. A remote, relatively closed community (although less so since the expansion of the oil & gas companies) is a classic setting for mystery novels & Ann Cleeves makes the most of the connections between families that result from living in such close proximity. Jimmy Perez is an enigmatic man who has had enough time away from Shetland to be mistrusted by some but it’s also given him perspective which is valuable in his work. In a way Jimmy is the typical loner detective, self-contained & melancholy, but he’s a more well-rounded character than the stereotype implies. Sergeant Sandy Wilson, who has lived on Shetland all his life, lacks confidence & looks to Jimmy for reassurance. His familiarity with the people & the place is both an asset & a burden but Jimmy has learnt how to work with Sandy to bring out the best in him.

All the characters are interesting & memorable, no matter how small a part they play in the story, like the observant young cashier at the supermarket who grabs any excuse for a cigarette & a coffee break to talk to Sandy to Rogerson’s business partner, Paul Taylor, with his frazzled wife & three small sons. Jane Hay is a recovering alcoholic who is starting to feel restless in her gratitude to her husband for supporting her & worried about her son, Andy, who has dropped out of university & is back home, silent & uncommunicative. Jane’s husband, Kevin, works hard but is unsettled by something or someone. Local councilor, solicitor Tom Rogerson seems successful but some of his decisions on the Council have upset locals & his family – wife Mavis & daughter Kathryn, the local schoolteacher – seem unaware of the rumours about his womanising.

I read Cold Earth so fast that, as usual, I had no idea about the identity of the murderer, even as Jimmy & Willow were racing towards the solution. I love a police procedural where all the steps of the investigation are laid out. There are flashes of intuition but most of the work is a hard slog, often frustrating but with enough clues to keep the detectives hoping & the readers reading along at a breakneck pace. I’m assuming that there will be a final novel in this second quartet with Fire in the title & I can’t wait!