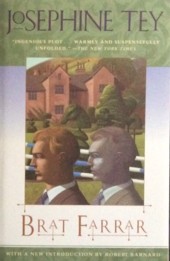 Patrick Ashby committed suicide when he was just thirteen. He threw himself off a cliff or swam out to sea until he could swim no more. His parents had been killed in a plane crash shortly before but his family – twin brother Simon, sisters Eleanor, Jane & Ruth & Aunt Beatrice – & friends had no idea that he was distressed enough to take such a drastic step. Beatrice Ashby (known as Bee) had stepped in to look after her nephews & nieces & take on the running of The Latchetts, the estate & horse stud that would provide a precarious living for the family. Precarious, that is, until Simon, now the heir to his mother’s fortune after Patrick’s death, turns 21 when he will inherit.

Just before this milestone, a young man turns up claiming to be Patrick Ashby. From the beginning, the reader knows that he is not Patrick but an imposter. Brat Farrar was a foundling, brought up in an orphanage. When he runs into Alec Loding on a London street, Loding is overcome by the family resemblance to the Ashbys, mistaking Brat at first for Simon. Loding conceives a scheme to defraud the Ashbys & make his own life as an unsuccessful actor easier. Loding had grown up at the neighboring estate to Latchetts & knew the family intimately. He convinces Brat that the scheme can work & coaches him in the part. Brat soon finds himself enjoying the adrenaline &, in a short time, he has convinced the family lawyers & Bee that he is Patrick returned from the dead.

Brat’s own life has been anonymous enough that he can just tell his own story, apart from the motives for his disappearance & how he found himself in America. Brat had worked with horses there & loved it until an accident left him lame. The Latchetts is everything he had ever dreamt of & he soon finds himself in love with the house & everyone in it; everyone except Simon who curiously refuses to accept that Patrick has returned. Simon has been done out of the inheritance that for eight years he had confidently expected would be his. But, is there some other reason for his attitude than arrogance & bad temper? How long will Brat be able to keep up the pretence before someone or something trips him up?

This is such a wonderful book. I love Josephine Tey’s novels & I read them all many years ago. The Daughter of Time is the only one I regularly reread but I love them all. Tey is so good at the psychological motivations of her characters. We are aware of Brat’s emotions from the start –  suspicion of Loding’s motives, to the excitement of the game & deceiving people so successfully to the complications that arise when he is welcomed into the Ashby family & begins to feel ashamed at his deception of these people he has grown to love. There’s also his wariness of Simon as he tries to work out his feelings & account for his behaviour. Bee was my favourite character. She has given up her own life to care for her brother’s children (like Elizabeth Branwell, who left the warmth of Cornwall for Haworth after her sister’s death – I’m rereading Elizabeth Gaskell’s Life of Charlotte Brontë) & has endured not only his loss but that of Patrick as well. She is kind, loving & principled, refusing to touch the trust money even when the stud was in trouble & she, along with Simon & Eleanor, have kept Latchetts going.

Patrick comes alive to us as a sensitive, kind boy, as is evident in the joy that neighbours & tenants show on his return. Bee has been haunted by the thought of his final moments, wondering whether, at the last minute, he regretted his actions. One of the stumbling blocks for Bee in Patrick’s return is why he should never have written to her to let her know that he was safe. The Patrick she knew would not have been so cruel. Still, she welcomes Brat wholeheartedly & never reproaches him. Simon is arrogant, privileged & unlikeable but still, it’s not difficult to understand his shock at the change in his fortunes & the future he thought he would enjoy.

Tey is also good at creating a world, in this case, a horse stud & riding school. I’m not interested in horses at all but she made that world, with its horse shows, racing, riding lessons for bored schoolchildren & the precariousness of success where a bad season could almost destroy the business, very real & interesting. The minor characters are also interesting – vicar George Peck & his beautiful wife, Nancy, who is Alec Loding’s sister & was once the belle of county society, shepherd Abel, fussy Mr Sandal the lawyer, Lana Adams, the “help” who epitomises the new breed of household help post WWII & Glaswegian Mr Macallan, the local reporter who hopes his story about the Ashby resurrection will get him onto the front pages of the London papers. I couldn’t help but think that Tey made him Scots because of her background. I must find out if there’s a model in her life for all the young American men who pop up in her books – Brat & Brent Carradine in The Daughter of Time & I’m sure there was one in The Singing Sands. I could always read the recent biography on the tbr shelves, I suppose!

I listened to Brat Farrar on audio, read by Carole Boyd, one of my favourite narrators.

There is a copy of Brat Farrar available from Anglophile Books.