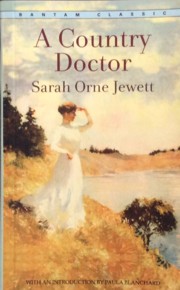 I was reminded of Sarah Orne Jewett last year when I read Willa Cather’s Letters. I’d read her most famous novel, The Country of the Pointed Firs, years ago but I’m interested in New England writers so I bought a copy of her first novel, A Country Doctor.

Adeline Thacher is a wild young woman who leaves her mother’s farm in rural Maine to go to the city. She meets a well-to-do young man, marries him &, after his death, rejects his family who have always disapproved of her. Desperately ill, she makes her way back to her home & collapses on the doorstep of her mother’s farm with her baby in her arms. Adeline dies the next day & the little girl, Anna (called Nan), is brought up by her grandmother. Before Adeline dies, she asks the local doctor to be Nan’s guardian.

Nan grows up bright & wilful, the delight & the despair of her grandmother. Dr Leslie takes a vague interest in the little girl, especially when it seems she has some interest in medicine. Her father had been an assistant doctor in the Navy & it seems as though Nan has inherited his talent. Old Mrs Thacher asks the doctor to look after Nan when she dies & he fulfills his promise, taking her to live with him & his gruff but kind housekeeper, Marilla. Nan’s rich Boston aunt, Miss Prince, tried to get custody when Adeline died but had to be content with sending a yearly allowance which Dr Leslie has banked for Nan’s education. Nan knows nothing about the Princes apart from local gossip. Dr Leslie, with the help of his friend & neighbour, Mrs Graham, give Nan a good upbringing with Mrs Graham supplying the social niceties & polish while the doctor encourages Nan’s medical interests. Nan’s schoolfriends recognize her abilities while being sceptical about her future career,

Long ago, when Nan had confided to her dearest cronies that she meant to be a doctor, they were hardly surprised that she would determined upon a career which they would have rejected for themselves. She was not of their mind, and they believed her capable of doing anything she undertook. Yet to most of them the possible and even probable marriage which was waiting somewhere in the future seemed to hover like a cloudy barrier over the realization of any such unnatural plans.

When Nan finishes school, she decides to study medicine, encouraged by the doctor. She writes to her aunt in Dunport asking for a meeting & Miss Prince agrees with some apprehension about this unknown niece, raised in the rural backwater of Oldfields. Miss Prince lives alone in her family home. She had one unhappy love affair in her youth but has stayed in touch with the son of her old lover, George Gerry. Young George has become like a favourite nephew & is working in a law office in town. Miss Prince is soon very fond of Nan but horrified at her plans to become a doctor. Nan enjoys her time in Dunport & becomes involved with a group of young people enjoying sailing & picnics. George falls in love with Nan & proposes marriage. Although Nan loves George, she has long accepted that her choice of a career will preclude marriage. Miss Prince’s disapproval of her plans represents the accepted view of a young lady’s life choices & she believes she has the financial clout to make Nan change her mind. She’s not above a little emotional blackmail either. Nan’s own wishes are more in tune with her upbringing & Dr Leslie’s encouragement but she has a difficult choice to make. The calibre of her opponents is exemplified in old Mrs Fraley, a domineering woman who doesn’t expect to be contradicted,

A woman’s place is at home. Of course I know there have been some women physicians who have attained eminence, and some artists, and all that. But I would rather see a daughter of mine take a more retired place. The best service to the public can be done by keeping one’s own house in order and one’s husband comfortable, and by attending to those social responsibilities which come in our way.The mothers of the nation have rights enough and duties enough already, and need not look farther than their own firesides, or wish for the plaudits of an ignorant public.

A Country Doctor is such an interesting novel, especially given the autobiographical elements of the story & the time in which it was written. It was published in 1884 & was based, in part, on the author’s early life. Jewett’s father was a doctor & she spent a lot of time accompanying him on his rounds as Nan does with Dr Leslie. She was an outdoors child although not as willful as Nan. Dr Jewett seems to have been the model for Dr Leslie, a brilliant doctor who could have made his name in a big city practice but chose to spend hi life in rural Maine. Sarah may have thought about a career in medicine but her health was often poor & she may have felt that she wasn’t up to the demands of such a life. Medicine was only barely possible as a career for women in the 1880s. Elizabeth Blackwell had qualified as a doctor in 1849, the year Jewett was born, but it was a long, hard road to acceptance for her & the other women who followed. Maybe Nan’s plans were in the nature of wish fulfillment for Jewett. It was surely unusual to have a novel of the 1880s about a young woman determined to follow a career. Nan has truly combined the best qualities of both her families & some of the contemporary reviews point to Nan as a role model for young girls.

The picture of the rural community of Oldfields & the surrounding farms is beautifully drawn & the descriptions of the natural world are lovely & full of minute observation. The book begins a little uncertainly & takes a while to decide on its tone. The first chapter describes Adeline’s desperate journey to her mother when she even considers throwing herself & Nan into the stream in her struggle. Then, we meet Mrs Thacher & her neighbours, Mrs Martin & Mrs Jake Dyer, talking about old times & frightening themselves with ghost stories when they hear a noise at the front door. The next chapter takes us to the Dyer farm where twins Martin & Jake Dyer enjoy an evening without their wives. It seems that rural comedy will be part of the story. However, once Mrs Dyer rushes in with the news of Adeline’s return & sends her husband for the doctor, the Dyers fade into the background & just have walk-on parts in the rest of the novel.

The contrast between Nan’s two worlds shows just how much of a struggle she has to decide on her future. As she becomes involved in her father’s world, becomes fond of her aunt & falls in love with George, Nan can see the possibility of a different life. The scenes where Miss Prince tries to influence Nan while she tries to pull back are very effective. George is a bit of a cipher, a bit of a ditherer who is nonplussed by Nan’s proud determination. On a trip on the river, Nan & George come across a labourer with a dislocated shoulder. Nan competently pushes the joint back into place without fuss while George looks on feeling a bit squeamish. He’s just not in her league although she does love him & finds her decision difficult. I really enjoyed all the characters from kind Dr Leslie & prickly Marilla to lonely Miss Prince & chatty, nosy Captain Parish. Sarah Orne Jewett knew & loved Maine & I’m looking forward to reading more of her stories as A Country Doctor was such a delight.