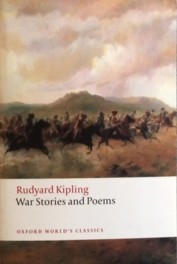 This poem, Mesopotamia, was written after the publication of a report into the disastrous Allied campaign there during WWI. The Army had learnt nothing from previous mistakes & the mismanagement, especially of the wounded, became a scandal. Kipling’s frustration is evident in the poem.

Since I’ve been reading Kipling’s stories & poetry, I seem to see his name everywhere. I read this article in the Guardian on the 150th anniversary of Kipling’s birth. I also discovered here that John Kipling’s grave has been found. Last week I mentioned the poignancy of Kipling writing the epitaph for the graves of unidentified soldiers when his own son’s remains were never found. I can also recommend the episode of BBC Radio’s In Our Time on Kipling which is mentioned at the end of that article.

They shall not return to us, the resolute, the young,
The eager and whole-hearted whom we gave:
But the men who left them thriftily to die in their own dung,
Shall they come with years and honour to the grave?

They shall not return to us; the strong men coldly slain
In sight of help denied from day to day:
But the men who edged their agonies and chid them in their pain,
Are they too strong and wise to put away?

Our dead shall not return to us while Day and Night divide–
Never while the bars of sunset hold.
But the idle-minded overlings who quibbled while they died,
Shall they thrust for high employments as of old?

Shall we only threaten and be angry for an hour:
When the storm is ended shall we find
How softly but how swiftly they have sidled back to power
By the favour and contrivance of their kind?

Even while they soothe us, while they promise large amends,
Even while they make a show of fear,
Do they call upon their debtors, and take counsel with their
friends,
To conform and re-establish each career?

Their lives cannot repay us–their death could not undo–
The shame that they have laid upon our race.
But the slothfulness that wasted and the arrogance that slew,
Shell we leave it unabated in its place?