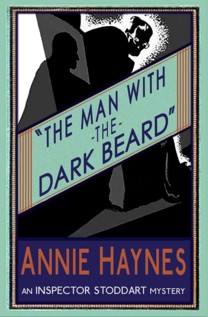 Dr John Bastow is an unlikely murder victim (especially if you believe my theory that it’s the unpleasant characters who are marked for murder in Golden Age novels). He is a respected doctor, a widower with two children & seemingly no enemies. So, when he’s found murdered, the motive seems elusive. Just before his death, however, he had a conversation with his old friend, barrister Sir Felix Skrine, where he hinted that he had knowledge of a crime that had gone undetected. Sir Felix advises him to go straight to the police & advises Dr Bastow to take a holiday as he’s obviously overworked. There are other potential motives lurking under the surface of the doctor’s seemingly placid life. Dr Bastow’s daughter, Hilary, has fallen in love with her father’s assistant, Basil Wilton, but the doctor doesn’t approve of the relationship. Dr Bastow forbids the relationship & sacks Basil. Also in the household are Hilary’s disabled brother, Felix, named after his godfather (usually known as Fee), the Doctor’s secretary, Iris Houlton, & Aunt Lavinia, an outspoken, eccentrically dressed woman who lives with the Bastows in between her travels to exotic parts of the world. She struck me as a cross between Mary Kingsley & Lady Catherine De Bourgh. Aunt Lavinia disapproves of Basil & is also suspicious of the Bastows’ new housemaid, Mary Ann, who she suspects of planning to entice the doctor into marriage or worse.

That same evening, the doctor is in his consulting room but doesn’t respond to the parlourmaid or Basil knocking on the door. Even Aunt Lavinia can’t rouse him. The maid goes goes into the garden, looks through the consulting room window & sees the doctor slumped at his desk. When the household break in, they find him dead, shot through the head at close range. Inspector Stoddart of Scotland Yard is called in & examines the scene of the crime. He finds a half-written letter to Sir Felix, about the subject of their earlier conversation, & a scrap of paper with the words, “It was the Man with the Dark Beard”. A Chinese box with the proofs of that other suspected crime has also been stolen. A colleague of Dr Bastow’s, Dr Sanford Morris, has a dark beard & when he shaves it off soon after the crime, & confesses that he had an appointment with Dr Bastow on the night of the murder which he says he didn’t keep, he becomes one of the main suspects. Adding to the puzzle is the disappearance of the mysterious parlourmaid, Mary Ann Taylor, & the sudden transformation of Iris Houlton, who seems to have inherited money. When a second murder occurs, it seems too much of a coincidence that the same person could be involved with both victims & not be the murderer. Inspector Stoddart & his assistant, Harbord (is he a Sergeant? I assumed he was but I don’t think his rank is ever mentioned) have their work cut out for them.

This is the first of four detective novels by Annie Haynes featuring Inspector Stoddart. As with The Crystal Beads Murder, I enjoyed Stoddart’s investigation of the crime, with its red herrings & false trails. However, I don’t think this book is as good as the later one. The villain is fairly obvious from the start although I didn’t work out how the murders were done. There’s also a touch too much melodrama for me in several scenes. Some aspects of the plot were more Wilkie Collins than Agatha Christie. I did enjoy some of the characterizations. Hilary’s brother, Fee, has been indulged because of his disability & is peevish & demanding because of it. My favourite character was Aunt Lavinia. I enjoy characters who call a spade a spade, even though they may be completely wrong. I can’t believe that she ever actually left the house in an outfit like this,

Today she wore a coat and skirt of grey tweed with the waist-line and leg-of-mutton sleeves of the Victorian era, while the length and extreme skimpiness of the skirt were essentially modern, as were her low-necked blouse, which allowed a liberal expanse of chest to be seen, and the grey silk stockings with the grey suede shoes. Her hair was shingled, of course, and had been permanently waved, but the permanent waves had belied their name, and the dyed, stubbly hair betrayed a tendency to stand on end.

I also didn’t believe the end of Lavinia’s story for one moment. However, The Man with the Dark Beard is a suitably convoluted mystery. Once the second murder is committed, I couldn’t stop reading. I’m looking forward to reading more Annie Haynes & luckily, Dean Street Press are reprinting all her novels & kindly sent me this one for review.

4 thoughts on “The Man with the Dark Beard – Annie Haynes”