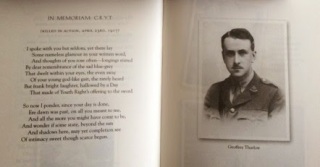 Next Saturday is Anzac Day & I’ve been reading about Vera Brittain this week so I thought I would post one of the poems she wrote during the Great War. They were published as Verses of a V.A.D. in 1918 & the subjects range from her war service in London, Malta & France to laments for the young men she lost. This poem was written in response to the death of Geoffrey Thurlow, one of the four men Vera knew well who were killed. It’s taken from Because You Died : Poetry and prose of the First World War and after. edited by Mark Bostridge.

I spoke with you but seldom, yet there lay
Some nameless glamour in your written word,
and thoughts of you rose often – longings stirred
By dear remembrance of the sad blue-grey
That dwelt within your eyes, the even sway
Of your young god-like gait, the rarely heard
But frank bright laughter, hallowed by a Day
That made of Youth right’s offering to the sword.

So now I ponder, since your day is done,
Ere dawn was past, on all you meant to me,
And all the more you might have come to be,
And wonder if some state, beyond the sun
And shadows here, may yet completion see
Of intimacy sweet though scarce begun.