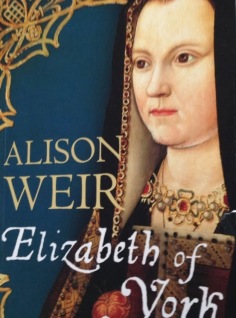 The subtitle of Alison Weir’s new biography of Elizabeth of York is The First Tudor Queen & Elizabeth has certainly been overlooked in comparison with the glamour of her son’s six wives. During her lifetime she was also overshadowed to an extent by her mother, Elizabeth Wydeville & her formidable mother-in-law, Margaret Beaufort. Usually characterized as gentle, beautiful & good, Alison Weir wanted to bring Elizabeth out of the shadows & reassess her life.

Elizabeth of York certainly knew the perils of Fortune’s wheel. Born in 1466, the eldest child of Edward IV & his controversial queen, she was heir to the throne until the birth of her brother, Edward, in 1470. She was betrothed to the Dauphin of France as a child & she remained a valuable prize on the European marriage market. However, the Wars of the Roses were a perilous time for royalty & Elizabeth also spent several stints in sanctuary at Westminster with her mother & siblings when Edward IV went into exile & the Lancastrians were triumphant. The battle of Tewkesbury in 1471 seemed to mark the end of the Lancastrian cause with the death of the Lancastrian Prince of Wales & the murder in the Tower soon after of Henry VI. Twelve years of relative prosperity & calm came to an end, though, with the death of Edward IV in April 1483.

Richard III’s usurpation of the throne led to a crisis in Elizabeth’s life. She was back in sanctuary, branded illegitimate, no longer a princess & virtually penniless. She was living with her mother & sisters on the charity of the abbot &, apart from the physical discomforts of her position, must also have worried about her future & the fate of her brothers, locked in the Tower. Elizabeth Wydeville eventually agreed that she & her daughters would leave sanctuary as Richard gave guarantees of their safety & they returned to Court. Whether they ever knew what had happened to the Princes in the Tower is unknown.

Elizabeth was then embroiled in one of the biggest scandals of Richard III’s brief reign. By early 1485, the heir to the throne, Edward, had died & Queen Anne Neville was ill. Richard knew that Henry Tudor, the Lancastrian claimant, was hovering in Brittany, aided in England by his mother, Margaret Beaufort’s, machinations on his behalf. Henry had publicly sworn to marry Elizabeth & join the two houses of Lancaster & York. Richard desperately needed an heir to the throne & his wife was dying. It seems that Richard planned to marry his niece, Elizabeth. What Elizabeth thought of this plan has been a matter of conjecture ever since. A letter, purporting to be by her to the Duke of Norfolk, was discovered in the 16th century. The letter talks of Elizabeth’s desire for the marriage & says that Richard is, ‘her only joy and maker in the world’ and that she was his, ‘in heart and thought, in body and in all‘. She also wonders if the Queen will ever die. Weir dissects this letter & the evidence for & against with great care. As it turned out, Richard’s advisers counselled against the plan & he was forced to make a public denial of the rumours. Only a few months later, Richard was dead at Bosworth & Henry Tudor became King.

Elizabeth’s marriage to Henry VII was a marriage of convenience that became a genuine partnership. Henry needed to marry Elizabeth to reconcile the factions & end the wars. However, he was very careful not to state that he reigned by right of his wife. By reversing Richard’s act, Titulus Regius, which declared Elizabeth & her siblings illegitimate, he automatically made her the Yorkist heir to the throne. He may also have distrusted her if he had heard the rumours about her proposed marriage to Richard. However, the marriage was a success, even though Henry delayed her coronation for several years. Elizabeth gave birth to an heir, Arthur, within a year of the wedding & other children followed, including the future Henry VIII, Margaret, Queen of Scots & Mary, Queen of France.

Elizabeth was a generous, charitable woman who often denied herself something to help her many charities. She remained close to her sisters & supported them when they were out of favour with Henry. Although Henry was a cautious man & did not give Elizabeth a generous allowance, he knew the advantages of display & was lavish when it came to public ceremonies & state occasions. Gradually, he came to trust Elizabeth & she seems to have been trusted with confidential State secrets. The reports of how they comforted each other after the death of Arthur show a couple who were loving & close. Henry’s grief after Elizabeth’s death in 1503 was devastating & obviously genuine.

Elizabeth’s relationship with Margaret Beaufort also seems to have been close & harmonious. The stories of Margaret dominating Elizabeth & keeping her on the sidelines come from only two reports from Spanish envoys who were at Court when Elizabeth was in early pregnancy. Weir speculates that their reports of Elizabeth being ignored & overlooked might stem from her ill-health. There are many more reports of Margaret & Elizabeth working together on charitable & educational projects.

Alison Weir’s book describes Elizabeth’s world in great detail. At times, there was almost too much description of Court ceremonies & the endless lists of fabric & garments bought. However, that’s my only quibble with this exhaustively researched biography of a woman who lived through tumultuous times. Elizabeth of York created a life for herself that may have required sacrifices & compromises but was nevertheless successful & ensured the survival of the Yorkist line.