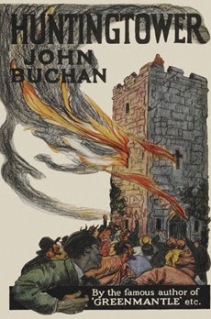 Dickson McCunn is a well-to-do Glasgow grocer who wakes up on the morning after he retires from business & decides to take a walking tour. His wife is on one of her regular visits to a hydropathic spa & Dickson is at a loose end. He sets off in high spirits to explore Carrick but soon finds himself involved in adventures he could never have dreamt of.

Dickson meets John Heritage, a Modernist poet who is drifting at a loose end, dreaming of a beautiful Russian princess he knew slightly when he was stationed in Rome during the War. The two men arrive in Dalquharter, a village near the coast & find lodgings with Phemie Morran after being rebuffed by a surly innkeeper. Exploring the area, they come across a large, modern house with a much older derelict tower called Huntingtower. Heritage is amazed to hear a voice he knows singing a song he’s heard before. It’s the Russian princess, Saskia, & Heritage & McCunn soon discover that she’s been kidnapped by henchmen of her great enemy who has been chasing her all over Europe. Saskia has been helping the opponents of the Bolshevik regime & she has a fortune in jewels to pass on to a man she has come to meet. The owner of Huntingtower had been her friend in Rome &, although he’s now dead, he had told her of his remote house in Scotland & so, when she needed a bolt hole, she headed for it. Her fellow conspirator, Alexis, is on his way but unfortunately, there’s no sign of him yet &, in the meantime, she must hold out against the threats of her captors as they wait for their leader to arrive.

Heritage & McCunn decide that Saskia must be rescued & they’re aided by the Gorbals Die-Hards, a group of Glasgow street kids who have formed their own irregular scout troop. Led by their Chieftain, Dougal, the Die-Hards have scraped together the money for a field trip with the help of various Glasgow beneficiaries, including McCunn. The Die-Hards are an efficient fighting force with Dougal having absorbed everything he possibly can about military strategy & tactics. Their hardscrap lives on the streets of Glasgow are perfect training for reconnaissance missions in the Scottish countryside. McCunn & Heritage are sworn into the troop with an oath & Dougal tells them what he’s discovered about the mystery at Huntingtower & his plans to rescue Saskia. The plan culminates in a battle between the Die-Hards, Heritage, McCunn, local landowner Sir Archibald Roylance & his staff of war wounded men & Mrs Morran against Saskia’s jailers & the reinforcements who arrive in a Danish brig with their leader, Paul Abreskov, who wants not only the jewels but Saskia herself.

Huntingtower is a great adventure yarn. Buchan is so good at this type of story with a fast moving plot, international conspiracies, evil villains & heroes motivated by honour & the rules of fair play. Dickson McCunn is a very sympathetic hero. He is drawn to Saskia because she reminds him of his long-dead little daughter & he surprises himself with his stamina trekking through the countryside & his readiness to break the law in a good cause. I love the descriptions of the countryside in Buchan’s novels. Scotland is always a major character & his Scots characters (even when their dialect is almost impenetrable) are always wonderful. Mrs Morran is a delightful woman, practical, intrepid & very definite in her opinions. She’s also an excellent cook. Sir Archibald only has a minor role but he’s a fully realised & very sympathetic character. A man who served in the Royal Flying Corps & was badly wounded just before the war ended, he’s now lame & frustrated with it. John Buchan’s novels are similar to his sister, O Douglas’s, novels in this portrayal of life after WWI. There’s a sense of melancholy in the lives lost & the very different future for the men who came back wounded.

I was prompted to read Huntingtower because it features in a new series of podcasts by Kate Macdonald at Why I Really Like This Book on books published in 1922. You can download the podcast or listen to it here. There are two more novels featuring Dickson McCunn & the Gorbals Die-Hards, Castle Gay (1930) & The House of the Four Winds (1935) & I’m looking forward to reading them.

I read Huntingtower on my e-reader so I didn’t have this beautiful cover (picture from here) on my copy.