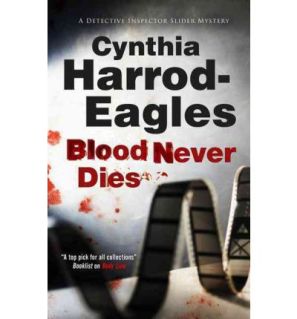 Bill Slider is one of my favourite fictional detectives so I was pleased to see Blood Never Dies arrive on my desk. As always, Slider is aided by his team, Jim Atherton, Norma Swilley, Colin Hollis & cheery pathologist Freddie Cameron. He’s also helped by his boss, malaprop-prone D S Porson, whose tangled aphorisms always make me smile. We also catch up with Bill’s wife, Joanna, who’s facing a dilemma when she’s offered a new job, his father, & young son, George.

This book has the most elaborate plot I’ve come across in a crime novel for some time. Slider is called out to a case of suicide when Hollis thinks that something is not quite right. Slider agrees as the dead man left no note & all his personal possessions seem to be missing. The method was also unusual. The man’s throat had been cut but the angle is wrong & the direction, especially when they discover that he was left-handed. He was living in a dingy room whose dodgy landlord wasn’t too fussy about his tenants as long as they paid the rent so no help there.

Slider’s first task is to identify the body. His suspicions are roused when he discovers that the man  called himself Robin Williams & Mike Hordern. By the time he discovers another pseudonym, Colin Redgrave, he knows there’s more to this death than he first thought. Once he discovers the real name of the victim & begins to understand what he was doing in the last months of his life, the case becomes more complex & confusing. Then, other deaths that looked like suicide or accident start to connect with the first one & the implications of the case start to encompass other parts of the police force. Bill has to solve the case quickly or risk losing control of it altogether.

Blood Never Dies is an excellent example of a police procedural that’s more than just a puzzle to be solved. The plot is complicated & I had no hope of working out what was going on & that’s just how I like it. A good mystery has me reading so fast that I don’t have time to stop & try to work things out. Slider & his team solve the case using old-fashioned legwork & a little intuition. The interplay between the coppers is amusingly snappy but Bill is such a decent man that the focus is always on the victim & solving the case. This is a perfect book for anyone who enjoys a traditional murder mystery & if you like it, there are 14 earlier books to track down.