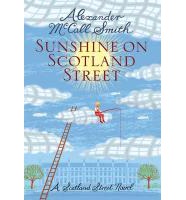 Another instalment in Alexander McCall Smith’s Scotland Street series is always a treat.  Sunshine on Scotland Street begins with the wedding of Angus & Domenica which almost doesn’t happen as Angus has forgotten to buy a ring & discovers a hole in his kilt. Luckily Matthew is Angus’s best man & he saves the day. But even Matthew is taken aback when, at the crucial moment in the ceremony when the minister asks if anyone has any just cause why the couple should not be lawfully joined together, a cry is heard in the church.

Matthew, Elspeth & their triplets look set for stardom (on Danish television at least) when film maker Bo, a friend of their invaluable au pair Anna, wants to make a fly on the wall documentary of their life. The star of the doco, however, turns out to be Big Lou, whose supporting role goes viral on the internet.

Long suffering Bertie Pollock is thrilled when Angus asks him to look after his dog, Cyril, while he & Domenica go on their honeymoon. Bertie’s mother, Irene, is less pleased & poor Cyril is soon confused & miserable trying to stick to Irene’s unreasonable rules about suitable behaviour for dogs. Irene hasn’t changed at all, although she is taking up more & more of Bertie’s appointment time with his new psychoanalyst, Dr St Clair. Bertie’s father, Stuart, may finally be about to assert himself when he starts researching DNA testing websites after he finally starts wondering about baby Ulysses’s parentage.

Self-absorbed Bruce is taken aback to discover that his new neighbour looks exactly like him. Bruce finds himself on the back foot as Jonathan takes charge & convinces him to swap lives. Bruce feels compelled to agree, almost against his will, & starts wondering if Jonathan has some sinister motive in mind.

As always, Scotland Street is a comfortingly familiar place to visit. A few of the storylines are left unresolved. Pat Macgregor has lunch with her father & just as he’s about to tell her something momentous, the chapter ends & we never return to them. Bertie & Stuart have plans to go fishing but when Stuart’s car goes missing (not to Glasgow this time), their plans are scuppered. We never do find out if Bertie goes fishing. Angus & Domenica are on honeymoon in Jamaica (thanks to Domenica as Angus hadn’t planned anything) for the whole novel, only returning to give their first party as a married couple at the end of the book, complete with one of Angus’s poems. Sunshine on Scotland Street is a lovely way to spend a few hours. Nothing too bad ever happens to anyone, not even Bruce or Irene, & it’s fun to catch up with everyone else.