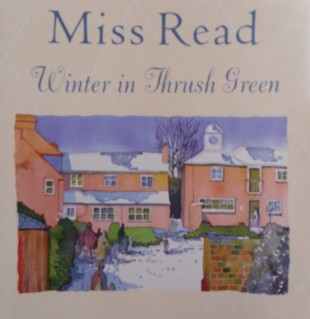 After reading the obituaries & blog posts about the death of Miss Read last week, I just had to read one of her books. I realised that I’d listened to Winter in Thrush Green on audio not long ago as the plot came back to me with a rush but it didn’t matter. I enjoyed sinking into the atmosphere of autumn & winter in a Cotswold village & meeting the villagers of Thrush Green again.

There’s great excitement when the corner house is finally sold – & to an eligible single man or maybe a widower or maybe (worst of all) his wife is arriving as soon as the house is put to rights. Harold Shoosmith, who happily turns out to be a bachelor, has lived abroad for most of his life & speculation runs riot as to whether he’s been in the Army, Navy or Air Force & whether he spent his time in Africa or Asia. It turns out that Harold was drawn to Thrush Green after a lifetime working for a pharmaceutical company in Africa because of his admiration for the missionary, Nathaniel Patten, who was born in the village. Harold soon becomes involved in local activities & is in great demand as a guest at parties such as that given for Halloween by Dimity Dean & Ella Bembridge, friends who have lived together for many years.

The vicar, Charles Hemstock, soon becomes close friends with Harold. Charles envies his cosy domestic arrangements as the vicarage has been a cold, dismal place since Charles’s wife died. Charles is a kind, thoughtful man, much loved by his parishioners but sadly unable to cope with his slatternly daily help so his home is comfortless & lonely. Charles & Harold soon become involved in organising a celebration for the centenary of Nathaniel Patten’s birth & a committee is formed to organise the commissioning of a statue of the great man.

The village school is run by Miss Watson with Miss Fogerty as her assistant. When Miss Watson is attacked in her home by a thief, it is shy, fluttery Miss Fogarty who takes charge & shows her worth to her formidable headmistress. It seems possible that the same man responsible for the theft of Miss Watson’s few pieces of jewellery could also have been stealing Dotty Harmer’s eggs but, apart from Dotty’s idea of setting a man trap to catch the thief (if she can retrieve the trap from the county museum that her father donated it to), there are few clues to his identity. That doesn’t stop grumpy sexton, Albert Piggott, from playing sleuth in the intervals he can spare from tidying the graveyard & sipping a pint at the Two Pheasants.

Albert’s slovenly ways are about to get a shock from his old schoolfriend, Nelly Tilling. Now a widow, Nelly, plump & energetic, has set her sights on Albert, who needs taking in hand since his daughter, Molly, married Ben Curdle & moved on with him & his family’s travelling fair. Love is in the air as bossy Ella Bembridge realises that her cosy life with Dimity in their cottage could be about to change if she’s right about the growing attraction between her friend & Harold Shoosmith.

Winter in Thrush Green is another cosy, comforting instalment in the lives of the villagers of Thrush Green. I love the way that Miss Read describes the passing of the seasons, the coming of Christmas & the hazards of a hard winter. The delights of early spring end the book with the unveiling of the statue of Nathaniel Patten. Life isn’t all ease & happiness. The attack on Miss Watson & Dotty Harmer’s serious illness when she’s snowed in to her remote house, are good examples of how Miss Read doesn’t sugarcoat the realities of village life. Not everyone in the village is kind or honest & the intimate knowledge everyone has of everyone else’s business can be a curse as much as a blessing. This lack of sentimentality as well as the beautiful descriptions of nature & the endearing characters she creates are the reasons why I love to read her books. 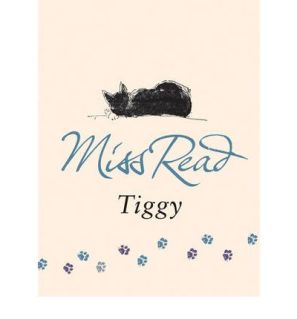 Another reason why I love Miss Read is her love of cats. I’ve also just read Tiggy, a short memoir about one cat that crept into Miss Read’s affections. Tiggy is called a memoir & it’s a true story about one of Dora Saint’s cats rather than the fictional story of one of Miss Read’s cats. I admit I was confused at first because Miss Read’s cat in the Fairacre book is called Tibby. This is a very short book, only 40pp in my e-book version but it’s charming. The author swears off owning a cat because she’s lost several cats to the passing traffic & feels it’s not right to put any more cats in danger. Her mind is changed by the arrival of a little black & white cat, starving & with five kittens to feed. At first, Miss Read thinks that a hedgehog has been eating the bread & milk she’s left out at night but she realises that it’s a cat. She calls her Mrs Tiggywinkle or Tiggy after the hedgehog in Beatrix Potter’s story.

Tiggy’s determination to keep her family safe & alive impresses Miss Read so much that she can’t resist taking the family in. The story of how she gradually wins Tiggy’s affection & trust & then sets about taming the kittens & finding them homes would appeal to any cat lover.