It was a lovely early Spring weekend in Melbourne & one look at the garden told me that the time had come to sweep the drive & do a little weeding & cutting back. Lucky & Phoebe came out to help, supervise & explore.

and even taller trees.

She also enjoys stalking through the undergrowth, 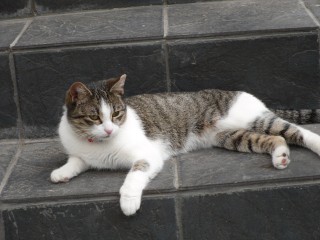 & relaxing on the front steps.

Lucky, on the other hand, was content to follow me around, eating grass & enjoying the fresh air.

These photos pretty much sum up their very different personalities. Lucky is much quieter, happy to follow me around & sit on my lap when I settle down with a book & cup of tea. She’s much less nervous than she was when she first arrived & she & Phoebe get on quite well, especially now that they have the garden to roam in & can get out of each other’s way when necessary. Phoebe is a daredevil. She’s already given me several (more) grey hairs. She fell from the roof of the back porch last week. Luckily she grabbed on to the handrail of the back stairs & I was able to rescue her. It’s a long way to the ground. She’s also disappeared over the back fence a couple of times & I’ve been nervous about where she was. But, she’s always come home &, if she did get lost, she’s tagged & microchipped so I just try not to worry too much. After all, they’re out all day when I’m at work & I have no idea what they’re getting up to.

It’s lovely to sit on the couch in the evenings with Lucky on my lap & Phoebe asleep beside me, exhausted by another day of climbing & exploring. The cats, that is, not me. Librarians don’t do much climbing or exploring.

5 thoughts on “The Girls in the Garden”