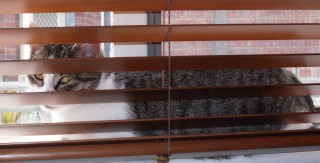 Well, 10 days after moving in, Phoebe & Lucky are relaxed & feeling more at home. I still haven’t taken them outside & I’m worried about Phoebe as she’s such a daredevil, loves climbing & I’m concerned that she’ll wander. I never had to worry about Abby because she was an elderly cat when she came to live with me & never climbed further than my lap. Phoebe has been on top of the laundry cupboard, the fridge & the top of the blinds in the lounge room as well as sitting on every window sill in the house as you can see.

Lucky is much calmer. She also enjoys looking out the window but from a more sedate distance. She loves sitting on the TV unit (notice the expensive but neglected cat tree in the background). They do use the cat tree as a scratching pole which is great but neither of them want to sit on it, although I think Phoebe used it as a launching pad for her trip to the top of the blinds this morning. Lucky loves sitting on my lap. As soon as I sit down, she’s there.

I try to give Phoebe some lap time when Lucky’s asleep in her other favourite spot, burrowed into Abby’s old rug . It must be a need for security as she loves burrowing right into it. I’ve also rearranged the furniture so there’s room for Phoebe to curl up on her blanket next to me in the evenings when Lucky’s on my lap. (Phoebe’s half-asleep on my lap at the moment).

They’ve been getting on quite well together. A few spats & Phoebe likes to play when Lucky isn’t in the mood but they’ve been rubbing noses as well. They both love chasing after little balls with bells in them although Phoebe’s broken the feather on a stick already! I may be able to fix it with a strong elastic band…  So, apart from my worries about letting them outside, we’re getting on very well. I went back to work on Monday & they seem fine left alone all day. Happy to see me at night, of course, because they know it’s dinner time.

As to books, well, I’m reading Sir Walter Scott’s The Talisman with my 19th century book group. It’s one of his tales of the Crusades &, after a slow start, it’s become quite exciting. Lots of conflict & tension in love & war. I’m also halfway through Maria Edgeworth’s The Absentee, about a young man exploring his Irish heritage in early 19th century England & Ireland. Lots of social comedy & a romance that seems doomed but all may not be lost. I hope to finish it tomorrow. This afternoon I’m off to see the new version of Jane Eyre at the movies. The reviews have been quite good so I hope it’s a good adaptation & they’ve used lots of the original dialogue!

8 thoughts on “Settling in”