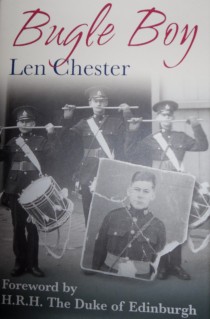 Every year, around Remembrance Day & Anzac Day, I find myself reading books about WWI & WWII. Fiction, non-fiction, letters, diaries, poetry. I’m endlessly fascinated & humbled to read about the experiences of men & women who gave up the comfortable, certain lives they knew & joined the forces or worked on the Home Front to help the war effort in any way they could. A few months ago, Lynne, better known as Dovegreyreader, sent me a copy of her father’s memoir of his war service, Bugle Boy. Len Chester is better known to the readers of Lynne’s blog as The Tinker & he makes regular appearances there, most recently, eating a hot cross bun on Good Friday.

Len served throughout WWII as a Boy Bugler in the Royal Marines, having joined up just a few months before the beginning of the war at the age of fourteen. That’s the first shock to get over. Fourteen years old. It seems like something out of Nelson’s Navy and, as Len soon discovers, some of the routines & punishments on board ship hadn’t moved on much since Nelson’s day. Len soon recovers from the shock of having to make his own bed to regulation standard (having never made his own bed before), being woken by Reveille at 6am, polishing the cork floor till it shone like a mirror and getting his uniform ready to go on parade at 8am. Len was a fast learner & soon knew all the tricks of the barrack-wise. When his parents came to visit for the first time, he marched up to the Sergeant on the gate to ask permission for leave.

Drawing myself up to my full height, I halted in front of the Sergeant.
‘PO/x 3943 Boy Bugler L Chester, permission to leave barracks Sergeant.’
My father was bursting with pride and my mother had tears in her eyes; I was terrified. Whilst I stood there with my proud parents watching, he did a 360-degree inspection of me, including a bird’s eye view of my cap cover, because I’m sure he was 7’6” tall.
‘You have dust in the welts of your boots, go back and clean them properly.’
My father’s pride at that moment knew no bounds, my mother shed some more tears and I was completely humiliated.

Of course, Len was an old hand of three weeks standing so he just went back to his bunk, sat there for a few minutes, went back to the Sergeant & was passed through with no problems. After his initial training, Len was posted to HMS Iron Duke stationed at Scapa Flow, the supposedly impregnable base of the Royal Navy in the north. An air raid in March 1940 almost ended Len’s career in the Marines.

I was very lucky during that raid as I was sent with a message to the bomb area and had to move along the starboard waist when I heard the whine of a plane diving. I didn’t wait but ran as fast as I could, easily breaking the four-minute mile, undoing eight cleats on an armoured door and getting inside to safety. The plane machine-gunned all down the starboard side and after the raid I dug a bullet out of the decking where, a short time before, I had run. I still have that bullet – it is a tracer bullet – but it hasn’t got my name on it.

The most dangerous part of Len’s war service was when his ship was part of the Arctic Convoy fleet. He was now on HMS King George V, a 35,000-ton battleship. At the age of 16 & with two years service, Len was looked on as an “old soldier”, and he found the life on board more agreeable even though life was more precarious. The ship had a Royal Marine band so he had the company of the other band members instead of just himself and another boy bugler who were kept apart from the other seamen. The task of HMS King George V was to keep between the Norwegian shore & the convoy of ships sailing from Scapa Flow to Russia. The bitter cold meant that life on board was a constant struggle to keep the ship clear of ice which could damage the guns. Mines were the main danger as the German battleship Tirpitz was often expected but it never actually put to sea.

Incredibly, the men who served on the Arctic Convoys were never awarded a campaign medal. The Arctic Association was formed to remedy this & eventually a lapel badge, the Arctic Star, was awarded & a white beret could be worn. There are very few men left who have the distinction of wearing the white beret but Len Chester is one of them,

It isn’t truly white, actually; it has a yellow shading to denote the fact that blood turns yellow when frozen on ice.

After the Arctic Convoys, Len was posted to the Mediterranean and, when he turned 18 in April 1943, he transferred to the Royal Marines. After training, he was drafted to HMS Glasgow and served in the Far East. Len’s story is a fascinating one. I don’t think the current generation really has any idea of the hardships endured by the men & women of the war generation & that’s why it’s so important that stories like Bugle Boy are written down & published. Len credits his late wife, Vera, & daughter, Lynne, with pushing him into writing down his story & anyone who reads the book can only thank them for their persistence. 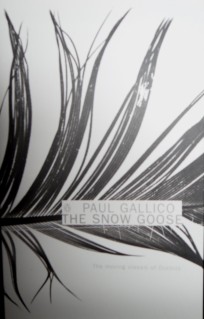 I also read Paul Gallico’s lovely story, The Snow Goose, as part of my Anzac Day reading. I know I’ve read this story before but it’s been a very long time & I loved reading it again. My local Classic FM station sometimes plays the radio version of The Snow Goose with Herbert Marshall as narrator & playing Philip, usually around Remembrance Day. This is a very moving production. Herbert Marshall had a beautiful voice, I always loved him in two of my favourite movies, The Letter with Bette Davis & The Enchanted Cottage with Robert Young & Dorothy McGuire.

The Snow Goose is a fable about innocence, beauty, courage & love. Set on the wild Essex coast, it’s the story of Philip Rhayader, a man who sees himself as an outcast because he has a hunchback & a crippled hand. He retreats to a lighthouse where he sets up a sanctuary for the birds who stop there on their migration. He also paints and sails & lives a completely solitary life. One day, a young girl, Frith, comes to him with a snow goose, wounded by hunters. Together they heal the goose & form a tentative friendship. Frith is timid & initially frightened of Philip’s appearance but she grows in confidence. The snow goose, a rare visitor from Canada, continues to return to Philip every year on her migration. For several years, the snow goose doesn’t visit & Philip realises how much he has come to rely on Frith’s visits. Then, in the first year of WWII, the snow goose returns, just as Philip is about to join the great flotilla of boats that set out to Dunkirk to help with the evacuation of the British Expeditionary Force. Frith watches Philip set off in his tiny boat with the snow goose soaring overhead & waits for his return. This is such a gentle story, but its themes of friendship, love & sacrifice are very relevant to Anzac Day & every other day of the year.

5 thoughts on “The Tinker & the Snow Goose”