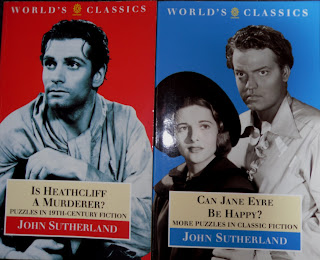 I’m reading Thomas Hardy’s A Pair of Blue Eyes with one of my online reading groups at the moment. I last read it over 20 years ago so the plot isn’t exactly fresh in my mind but the scene where Elfride walks around the parapet of the church tower & almost falls, reminded me of one of the essays in John Sutherland’s book of puzzles in 19th century fiction, Can Jane Eyre be Happy? When I checked the book, the chapter What is Elfride’s rope made of? refers to a later incident but it reminded of this wonderful series of books written by John Sutherland.

The first book in the series, Is Heathcliff a Murderer?, was written as an antidote to the deadening effect of literary criticism on the enjoyment of the ordinary reader. Sutherland is a well-known academic & critic with a lively sense of humour & fun. He has edited many 19th century classic novels for the Oxford World’s Classics series & is obviously as intrigued as any common reader by the mistakes, errors & unanswered questions in these books. The questions he asks in Is Heathcliff a Murderer? range from What is Jo sweeping? (Bleak House) to Is Will Ladislaw legitimate? (Middlemarch) What does Arabella Donn throw? (Jude the Obscure) and Why does the Count come to England? (Dracula). He looks again at questions that have puzzled many readers & critics. What sex is Lady Bertram’s Pug in Mansfield Park? At different times in the book, Pug is referred to as He & She. Then there are the obvious mistakes like the apple blossom in June in Jane Austen’s Emma.

Of course, there’s also the title essay where Sutherland examines the evidence of Hindley Earnshaw’s death in Wuthering Heights & speculates whether the beating he received from Heathcliff contributed to his death. There’s also Joseph’s evidence that he was sent for the doctor & Heathcliff & Hindley were left alone for some time when anything might have happened. As Joseph says, ‘… he warn’t deead when Aw left, nowt uh t’soart’. The joy of these essays is that Sutherland discusses the characters & situations as though they are real. He discusses the improbability of a 27 year old man like Hindley drinking himself to death in a single night. Although Joseph is not a sympathetic character, he is invariably honest & Heathcliff had a motive in wanting Hindley dead – his ultimate aim of triumphing over the Earnshaws & taking control of the Heights. This is Sutherland’s conclusion,

Whether or not Heathcliff is guilty of capital crime remains a fascinating but ultimately inscrutable enigma at the very heart of the narrative. For what it is worth, I believe he did kill Hindley, although for any unprejudiced jury it is likely that enough ‘reasonable doubt’ would remain to acquit him. 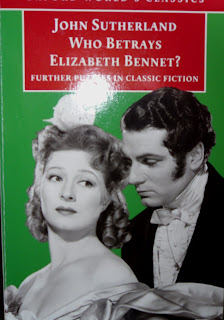 Is Heathcliff a Murderer? was so successful that a second & then a third volume was called for. Sutherland quotes some of the letters he received from readers querying his conclusions & suggesting other conundrums that had always puzzled them. The title essay asks how Jane Eyre can expect a happy married life with a man who locked his first wife in the attic, discarded mistresses all over Europe & tried to trick her into a bigamous marriage. Sutherland’s tongue is often in his cheek but anyone who loves 19th century fiction would enjoy these books. Some of the other essays in Can Jane Eyre be Happy? are about Vanity Fair (How many pianos has Amelia Sedley?), Armadale (What, precisely, does Miss Gwilt’s purple flask contain?) & Tess of the D’Urbervilles (Who will Angel marry next?). In Who Betrays Elizabeth Bennet? the conundrums continue. The essay on A Christmas Carol is on a point that has always puzzled me. How do the Cratchits cook that enormous turkey sent by Scrooge on Christmas morning? In the title essay, he discusses how Lady Catherine could have heard the rumour about Lizzie’s imminent engagement to Mr Darcy in Pride & Prejudice. 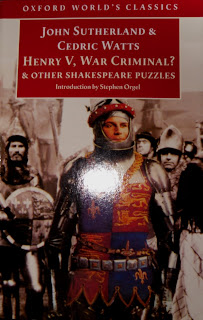 Sutherland then moved on to Shakespearean enigmas, including the evidence that Henry V was a war criminal for his actions after Agincourt, does Lady Macbeth really faint when she hears of Duncan’s murder or is she putting on an act? and how old is King Lear? 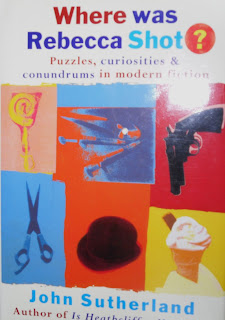 20th century fiction is covered in Where was Rebecca shot? Now, we all know Maxim de Winter shot Rebecca in the boathouse on the beach near Manderley but the essay asks where on her body was she shot? Why did Maxim just happen to have a gun with him when he went to the boathouse that night? Who was the woman whose decomposing body Maxim identified months later? She is lying in the family vault but when Rebecca’s body is found in her boat, this other woman & her identity are ignored. No inquest takes place to enquire into her identity & how she died. Was she left in the family vault beside Rebecca? All excellent questions that the reader ignores in the excitement of devouring a wonderfully absorbing book as Daphne Du Maurier’s Rebecca. 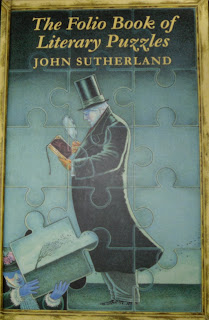 Finally, the Folio Society have produced a volume of Sutherland’s essays relating to books they have published.

I often dip into these books when I’m reading a 19th century novel & enjoy all over again Sutherland’s close reading of the books & his ingenious solutions to the many mysteries he investigates.