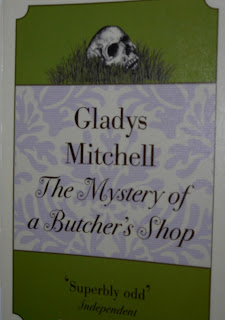 Hayley at Desperate Reader reviewed Gladys Mitchell’s The Mystery of a Butcher’s Shop last week & I was reminded that I had borrowed this very book from work & it was sitting on the tbr pile with a couple of other Gladys Mitchells. Hayley quotes a lovely passage about equal pay for women & as the book was published in 1930, I was intrigued enough to pick it up & start reading.

Gladys Mitchell’s detective is psychologist Mrs Beatrice Lestrange Bradley. Of indeterminate age, yellow-skinned, cackling, reptilian Mrs Bradley always seems to have been old. As Mitchell wrote from the late 20s to the mid 70s, Mrs Bradley, like Hercule Poirot, is preserved in aspic at the same age while the world changes around her. I’ve read a few of this series since Vintage began reprinting them with these lovely nostalgic covers. At first, I found Mrs Bradley’s clawing & cackling irritating, but I’ve decided that I can put up with it for the pleasure of becoming immersed in a labyrinthine plot that I have no hope of ever sorting out.

In The Mystery of a Butcher’s Shop, Rupert Sethleigh has disappeared. Sethleigh owns the Manor House in the village of Wandles Parva. He shares his home with various relations, including a cousin, Jim Redsey, an aunt, Mrs Bryce Harringay, & her teenage son, Aubrey. Other villagers include the absent-minded Vicar, Stephen Broome; his daughter, Felicity; Dr Barnes & his daughter, Margery & an arty trio, Cleaver Wright, Savile & Lulu Hirst. On the day before Sethleigh goes missing, he had summoned his lawyer to the Manor House, intending to change his will. When he disappears & a dismembered, headless body is discovered in the butcher’s shop of a nearby town, the police, & Mrs Bradley, who has recently moved in to the village, begin investigating.

Sethleigh was an unpleasant man, a money lender who didn’t scruple to blackmail anyone he could get a hold on. There are several people with a motive to kill him. His cousin, Jim Redsey, had asked for a loan to start a new life in Mexico but Rupert turned him down. Jim is the heir to Sethleigh’s estate but did he know that Sethleigh was about to change his will? The new heir would be young Aubrey Harringay. If his mother thought the will had already been changed, would she murder to set her son up for life? Then, there are the blackmail victims & the disgruntled husbands & fathers of the women Sethleigh seduced. On the night before he disappeared, Rupert & Jim were seen going into the nearby Manor Woods. Rupert never reappeared. As nearly everyone in the village seems to have passed through the woods on this night, there are motives, clues & alibis everywhere.

The Mystery of a Butcher’s Shop is a fast-paced mystery with a lot of humour, mostly thanks to Mrs Bradley’s witty conversation & such characters as Mrs Bryce Harringay, who has a habit of talking in Capital Letters. After a complicated episode involving a suitcase & the theft of a stuffed fish, Mrs Harringay upbraids her nephew, Jim,

‘I do not effect to be a judge of fish,’ said his aunt, ‘neither am I an authority on their names and habits. I merely remark that there were burglars in this house last night. I heard them. As proof I submit that the trout is gone. I realize that I am but a poor subnormal specimen of humanity, belonging to the weaker sex at that; one who may be contradicted, insulted and corrected at random by any young man who happens to be a very poor twelve at golf and an average – a very average – performer on the piano. Nevertheless, I have eyes and ears equal to any in this country, and I insist that this house was visited by burglars last night!’

Everything you could want in a Golden Age mystery is here from a map of the scene of the crime to extracts from Mrs Bradley’s notebooks. The police aren’t quite as flat footed & gormless as they often are in these books either. The mystery is satisfyingly complicated & I think I suspected almost everyone at some point, even the Vicar! Recommended to any fan of the Golden Age of detective fiction. As the quote from the Independent on the front of this edition says, “Superbly odd”.