Cristina from Rochester Reader was asking after Abby last week so I thought it was probably time for an Abby update. Abby’s very well. She had a visit to the vet a week ago as the result of some bleeding from her bowel & we discovered from a blood test that she has hyperthyroidism which is very common in older cats (she’s 16). She was on a bland diet for a few days & she’s had a course of antibiotics. After the first day, she was completely fine and it’s impossible to tell if the bleeding was just one of those things or something more serious. I think she just picked up something in the garden that irritated her on the way through. She’s on tablets for the thyroid condition & we go back for another blood test in a fortnight to see if the medication has lowered her levels. The bland diet wasn’t a great success but she put up with it pretty stoically whuile it lasted. 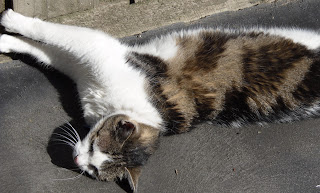 We’re both enjoying the end of summer here in Melbourne. The last week has felt distinctly autumnal. A few nicely crisp mornings & not too hot during the day. Fingers crossed that summer really is over & I can start planning winter mornings cooking soups, stews & chocolately treats & long afternoons reading & listening to music. 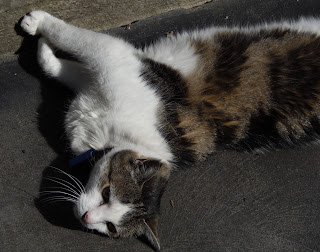 I took these photos yesterday. Abby’s morning routine usually includes sunning herself against the back fence, sharpening up her claws on the timber. 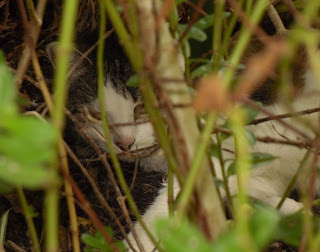 Then, after lunch, she likes to have a snooze in the shrubbery in the front garden. She doesn’t look very pleased with me, I may have woken her up. I’m sure she’ll forgive me around dinner time, she always does.