The events of the last few years of the life of Catherine of Aragon are well-known. Married to Henry VIII for over 20 years, she refused to allow her marriage to be annulled so that Henry could marry Anne Boleyn & produce a male heir to the throne. Catherine had been first married, at the age of 15, to Henry’s older brother, Arthur, Prince of Wales. Arthur died only months after the wedding & there has been speculation ever since as to whether the marriage was consummated. Betrothed & eventually married to the new heir, Henry, Catherine’s many pregnancies resulted in only one surviving child, her daughter, Mary. Catherine always denied that her marriage to Arthur was consummated & her defiance of the King & stubborn determination that their marriage was legitimate, was one of the causes of the major changes to the English Church during Henry’s reign. Catherine’s refusal to deny her marriage vows led to her gradual isolation from the Court & her daughter & she ended her life at Kimbolton House in Huntingdonshire, dying in early 1536.

Catherine’s early life is a story less often told. Giles Tremlett’s new biography takes full advantage of his familiarity with the Spanish sources for Catherine’s life. Catherine was the daughter of the monarchs who united Spain in the late 15th century. Isabella of Castile was one of the first women to rule in her own right & her marriage to Ferdinand of Aragon united the two most powerful Spanish kingdoms. Catherine’s childhood was spent travelling around Spain with her parents’ Court. She was betrothed to Prince Arthur, heir to Henry VII at a very young age & the marriage was to take place soon after Arthur’s 14th birthday. The match was very important for Henry. His Tudor dynasty was very new & desperately needed an alliance with a great European monarchy to lend legitimacy to its rule. Catherine’s parents were concerned about the number of pretenders & rebellions plaguing Henry’s reign & Henry’s response is detailed in Desmond Seward’s book, The Last White Rose.

Catherine arrived in England in 1501 & the wedding celebrations were lavish. The young couple, as Prince & Princess of Wales, spent the few months of their married life at Ludlow Castle, the administrative centre of Wales. They both fell ill of the sweating sickness & Arthur died. Over the next seven years, Catherine was reduced to a political pawn as her father & father-in-law, haggled over her dowry, her maintenance & her future. Catherine was only 16, in a strange country where she barely spoke the language & knew very few people. She was often ill & Henry VII’s well-deserved reputation for avarice meant that her allowance was rarely paid. She was reduced to selling her plate & jewels to feed herself & her attendants.

After Arthur’s death, Henry VII moved swiftly to betroth her to his 10 year old son Henry, now the heir to the throne. Catherine was well-treated while she was acknowledged as Henry’s intended bride but when her wily father dithered over paying the rest of her dowry, Henry VII started looking for ways to get out of the agreement. Catherine was isolated & in limbo for much of this period, although she did emerge into the limelight as her father’s ambassador at one stage, a unique role for a woman at the time. The long years of poverty & unhappiness came to an end when Henry VII died. 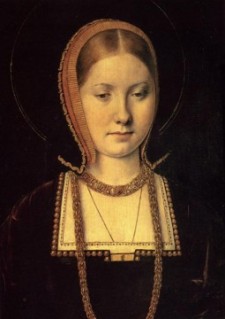 This portrait of a young Catherine is from terminartors.com.

Henry VIII was young & headstrong & he saw himself as a knight in shining armour rescuing the princess languishing in obscurity. He married Catherine & they were very happy together. She was overjoyed to finally be Queen of England, a role that had been her destiny from childhood. She threw herself into Henry’s enthusiasms for parties, tournaments & pageants. Although she was six years older than Henry, this seemed irrelevant when he was 18 & she was 24. It became more of an issue later as their children died young & it seemed increasingly unlikely that they would have a son. Henry was overjoyed when Mary was born but England had never had a Queen Regnant & Henry became obsessed with having a legitimate son to succeed him. Before this happened however, Catherine played a vital role in Henry’s government. She was Regent while Henry was overseas fighting the French in 1514 & oversaw the campaign against the Scots that resulted in the English victory at Flodden, where the Scots King, James IV, was killed. Catherine was involved in Henry’s European diplomacy. As the daughter & sister of Spanish monarchs, she was a great help to Henry. Her influence only lessened with the rise of Cardinal Wolsey.

However, by the late 1520s, Henry’s flexible conscience had begun to trouble him & he was began the process that became known as the King’s Great Matter, the annulment of his marriage to Catherine on the grounds that it was unlawful to marry his brother’s wife. Henry’s religious doubts were exacerbated by his infatuation with Anne Boleyn, a young lady of the Court. Her refusal to become his mistress lent urgency to Henry’s desire to repudiate Catherine. Henry dissembled in public, however, telling an assembly of nobles & dignitaries that he would be overjoyed to find his marriage to Catherine legitimate. He was instituting the proceedings to ease his conscience,

There was never thing more pleasant nor more acceptable to me in my life… for I assure you all, that besides her noble parentage… she is a woman of most gentleness, of most humility and buxomness… If I were to marry again, if the marriage be good, I would surely choose her above all other women.

The hearing that followed was extraordinary as the first time a King & Queen of England had been summoned by an ecclesiastical court. Cardinal Campeggio had come from Rome to preside. Henry was expecting a quick decision in favour of the annulment. Witnesses testified that Arthur had boasted of consummating his marriage & the young couple’s attendants were dragged out of retirement to recall memories of the short marriage. Catherine’s Spanish attendants were not called but they did give evidence & Tremlett has discovered their depositions in a Spanish archive. Naturally the Spaniards denied the marriage was consummated but their evidence should be accorded as much weight as the English witnesses.

When Catherine was called into Court to give evidence, she caused a sensation by ignoring the judges & falling to her knees before Henry. She spoke movingly & from the heart, trying to provoke a response from the man she had loved for over 20 years, appealing to his conscience as to the truth of her statements,

I have been to you a true, humble and obedient wife, ever conformable to your will and pleasure, that never said or did anything to the contrary thereof, being always well pleased and contented with all things wherein you had any delight or dalliance, whether it were in little or much… The twenty years or more I have been your true wife and by me ye have had divers children, although it hath pleased God to call them out of this world, which hath been no default in me… If there be any just cause by the law that ye can allege against me, either of dishonesty or any other impediment to banish and put me from you, I am well content to depart to my great shame and dishonour. And if there be none, then here, I most lowly beseech you, let me remain in my former estate.

This picture of Catherine in middle age is from factoidz.com

Catherine then dramatically left the Court, never to return. The proceedings dragged on, Catherine stubborn, Henry frustrated, Anne Boleyn growing more desperate. Eventually, Henry broke away from Rome, appointed Thomas Cranmer as Archbishop of Canterbury, & his divorce was granted by his new Church of England. To the end of her life, Catherine refused to bend an inch. She refused to answer to the title of Dowager Princess of Wales & encouraged Princess Mary to defy her father. She saw her supporters, including John Fisher, Bishop of Rochester & Sir Thomas More, executed for refusing to accept Henry’s marriage to Anne Boleyn. Henry was afraid that Catherine’s nephew, the Emperor Charles, would declare war in support of her cause, but this became less likely as time passed.  Henry & Anne were overjoyed & relieved when Catherine died in January 1536 although Anne didn’t enjoy her triumph for long.

Catherine’s story is beautifully told by Giles Tremlett. His emphasis on her life in Spain as a child & his researches in Spanish sources give a fascinating picture of Catherine & her background. If you’re interested in the Tudor period, I’d recommend this book.