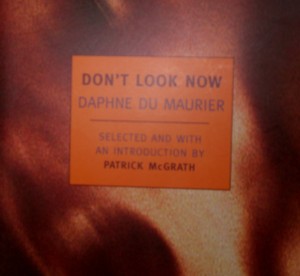 Reviewing short story collections is difficult. It’s hard to talk about the stories without giving too much away. I’ve enjoyed reading this collection of Daphne Du Maurier’s stories very much but I’m just going to concentrate on one of the stories. Two of the stories in this collection, the title story & The Birds were made into movies. Don’t Look Now by Nicolas Roeg & starring Julie Christie & Donald Sutherland, is generally considered a successful adaptation. The Birds by Alfred Hitchcock may be a successful horror movie (I haven’t seen it) but from what I’ve read, it’s only loosely based on the original story. Du Maurier hated it & couldn’t understand why the setting had been changed from Cornwall to California.

The Birds is the story of an ecological disaster. Nat Hocken is a farm worker, a solitary man despite being married with children. He enjoys his work, hedging & thatching, lonely work that leaves him free to enjoy his own company & observe nature. He especially enjoys watching the birds in all weathers along the coast. One day, at the beginning of winter, he notices that the birds seem to be restless, hovering over the sea, massing together. He thinks it’s just the early onset of winter & gets on with his work. That night, he’s woken by the sound of a bird tapping on the window, trying to get in,

He listened & the tapping continued until, irritated by the sound, Nat got out of bed & went to the window. He opened it &, as he did so something brushed his hand, jabbing at his knuckles, grazing the skin. Then he saw the flutter of the wings & it was gone, over the roof, behind the cottage… He shut the window & went back to bed, but feeling his knuckles wet put his mouth to the scratch. The bird had drawn blood.

Soon, the children’s bedroom is full of birds & Nat is fighting against them in the darkness, desperate to get them out of the house. Next morning he tries to tell his neighbours of the birds’ strange behaviour but they laugh at his fears. Later, on the radio news, he hears of similar incidents all over the country. The birds have banded together & are attacking humans & other animals. Nat sees hundreds of gulls sitting on the waves, just waiting. Waiting for what? Nat’s wife thinks the Government should “do something”, get the Army out to shoot the birds, drive them away. Nat isn’t confident that the authorities can do anything & begins barricading his family into their house, blocking all the windows & stopping up the chimneys. He plans to get in supplies as if to withstand a siege. He looks out to sea,

Next day, he visits his boss’s farm & finds the family still defiant, planning to shoot the birds & have pigeon pie for supper. Later, he returns to the farm & finds everyone dead, killed by the birds. He takes what supplies he can & retreats to his house with his family. A National Emergency has been declared but there’s no sense that anyone in authority is coming to help. The sense of menace in this story is incredible. Du Maurier builds up the suspense from Nat’s first sighting of the birds massing on the cliffs to the final, indeterminate ending, with the family waiting for something to happen & the sound of the birds tapping on the windows & the larger birds attacking the door.

The ordinariness of the setting & the threat makes it more frightening. I don’t like horror stories full of serial killers, zombies & vampires. The stories I find scary are those, like The Birds, that are rooted in the everyday. It’s never spelled out what turns the birds from benign creatures to killers. Has humanity’s carelessness of the environment led to a lack of food for the birds? Are they revenging themselves on the people who have ruined their habitats? There seems no reason, no explanation for their aberrant behaviour. Nat is Everyman, fighting for survival. The story is all the more powerful for the uncertain conclusion & the lack of explanation. Like a good ghost story, the ambiguity is what makes it frightening. Like Margaret Atwood’s The Handmaid’s Tale & John Wyndham’s The Day of the Triffids, The Birds is frightening because it’s possible. The world it depicts is recognizable. It wouldn’t take much to see it come true.